Since the fifties and for four decades, Wolf Vostell developed a protean work that embraces the major facts of history, World War II, the fall of the Berlin Wall, the mutation of the German company to the consumer society. Related to the New Realism in the early years in France, founder of Fluxus, Wolf Vostell is a landmark of the art of the second half of the twentieth century. The exhibition coincided with the tenth anniversary of the death of Wolf Vostell. It was organized in collaboration with the Rheinisches LandesMuseum Bonn. 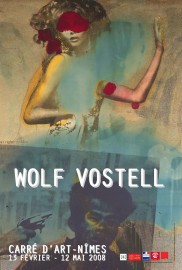