On May 8th 1993, Carré d’Art opened its doors. This building, which takes its name from being close by La Maison Carrée, one of the old town’s jewels, houses both the museum and the central lending library.

Twelve architects, including Franck Gehry, Jean Nouvel and César Pelli, were invited to compete in 1984. Lord Norman Foster was proclaimed the winner. Today, this British architect is known internationally for such fine achievements as the Hong Kong and Shanghai Bank in Hong Kong, the Century Tower in Tokyo, and the Royal Academy of London’s Sackler galleries.

Carré d’Art stands as a large glass cuboid with perfectly pure lines, its main feature being its transparency. A central atrium, recalling the inner courtyards of the houses of Nîmes, is topped by a canopy allowing light, another fundamental element of this architecture, to stream into the building. The building has nine floors, including four above street level. The top two floors are reserved for the museum and contain spaces to display the collections and temporary exhibitions. They cover a surface area of almost 2,000 m² and have a classical structure reminiscent of the floor plan of 19th century museums.

Immediately in the hall, the visitor is greeted by two works designed especially for Carré d’Art: Richard Long’s Mud Line, with handprints in the material of the wall, adds an undeniable pictorial dimension, and Gaul by Ellsworth Kelly, the vibrant opacity of which contrasts with the transparency of the building, and which is the first monumental sculpture to join the French collections. 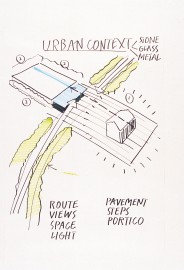