Swiss-born painter, Valérie Favre is first made known in France as an actress and as of 1991 has turned again to painting, which was her first interest. The exhibition brought together several groups of works from 2002 about her favorite characters rabbits, the fallen eagle, the centaurs, the majorettes. Also appeared on Peugeot lion logo, the goddess of Columbia films, cars. 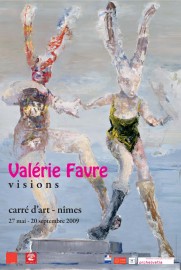