Gilles Barbier’s work favors the fragment and multiplicity to the sum. It offers a critical scenario facing a reality more and more affirmative and leveled at media-but increasingly also fantasized. Winter sports, artificial intelligence, the global village of McLuhan are modes of approach of a smooth contemporary world whose complexity disturbing decomposes more pixels than subjects. The course which was designed by the artist, with many new works, tended to subvert the clear and orderly architecture of Norman Foster to induce them differentiated rhythms where the movement of the body materializes the movement of thought. 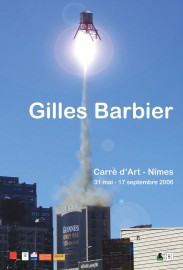